The timer is designed to run on a local network with the possibility of simultaneous display on several smart TV/screens. Implemented as a web application for a local network using node.js

Timer archive you need to unpack it to an arbitrary folder on your hard disk.

On the computer where the timer program will be installed, it is strongly recommended:

By default, it is recommended to unpack the timer archive to a folder on disk C:, the timer is started by a batch file c:\your_folder_name\start_timer.cmd, while the application window will exist all the time the timer is running (it cannot be closed). At the first launch, Windows Defender may issue a request to allow the program to access the network - it must be allowed.

After the end of the round, the application window can be closed forcibly (with a "cross") or by pressing Ctrl+C and then answering "y" to the question "Finish executing the batch file?".

According to international rules, you can also specify the rotation time - the number of seconds for a participant to transition between climbing periods.

If the start time of the round is specified in the future, the timer will display a countdown to the start. In this mode, the timer can be started 10 minutes before the start (since the timer displays only one digit of minutes).

The timer is started by the start button. The climbing time is counted continuously in a circle, the timer is stopped by the reset button. 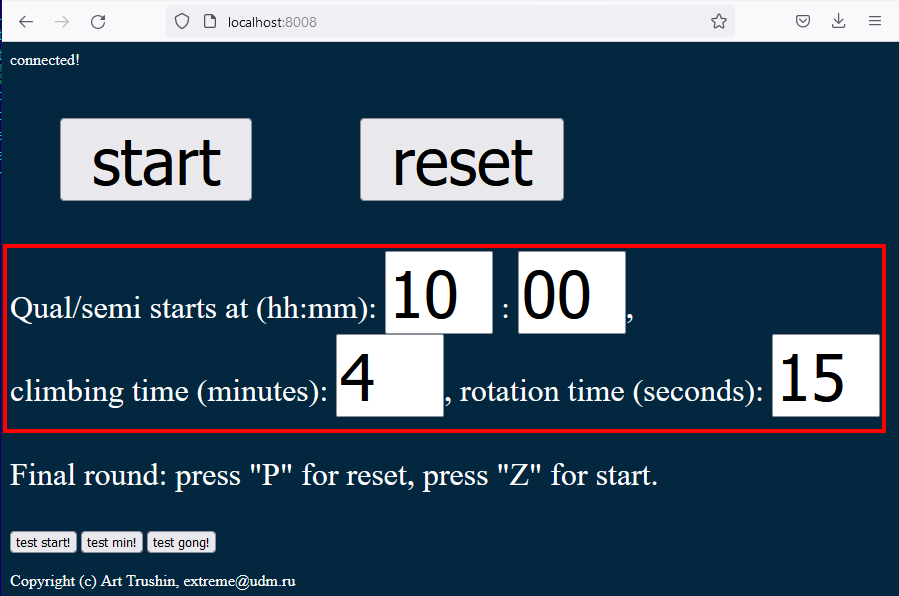 For the final round, when the next period should not automatically start after the end of the time period, only the climbing time should be set, and the start time and rotation time should be left empty.

The timer is started by the start button. The rotation period is counted once, then the timer stops at 0:00. If the attempt is completed earlier, the timer is reset using the reset button.

In addition, the timer can be started from the keyboard with the "z" key, reset with the "p" key. 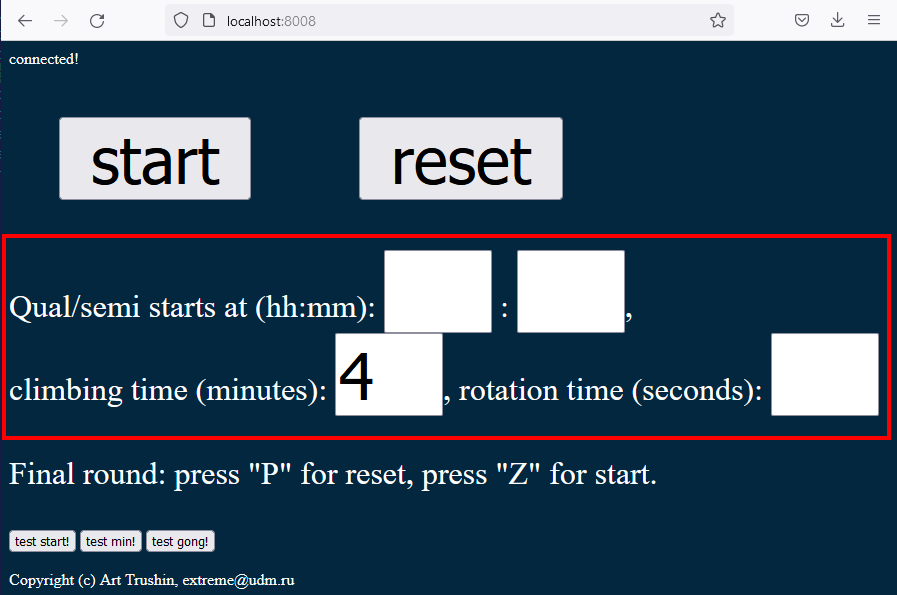 Beeps are played on all devices displaying the timer.

It is recommended to connect one of the devices (the main computer with a timer) with an audio cable to the general audio system of the event, and turn on the sound on all other screens so that they also play audio signals in case of a failure of the general audio system. If there is a noticeable desynchronization when working over the network (the signal sounds a fraction of a second earlier on one TV than on the other), it is recommended to leave the sound on only on the main computer where the timer is running.

You can check the sound signals without waiting for time using the buttons test start!, test main! and test gong! at the bottom of the timer page.

The timer display page opens on any other device (for example, on a smart TV placed in the hall) in the local network at the address http://<ip_address_computer>:8008/.

The timer font is selected to display on the full screen with a resolution of 1920 x 1080, while the control buttons are located below the visible area. If necessary, you can reduce the display scale in the browser.

The climbing time timer is displayed on a dark background, the rotation period timer (change of participants) is on red.

Please note: The timer can be started and stopped from any location. It is not recommended to provide viewers with physical access to a laptop or TV that displays a timer.